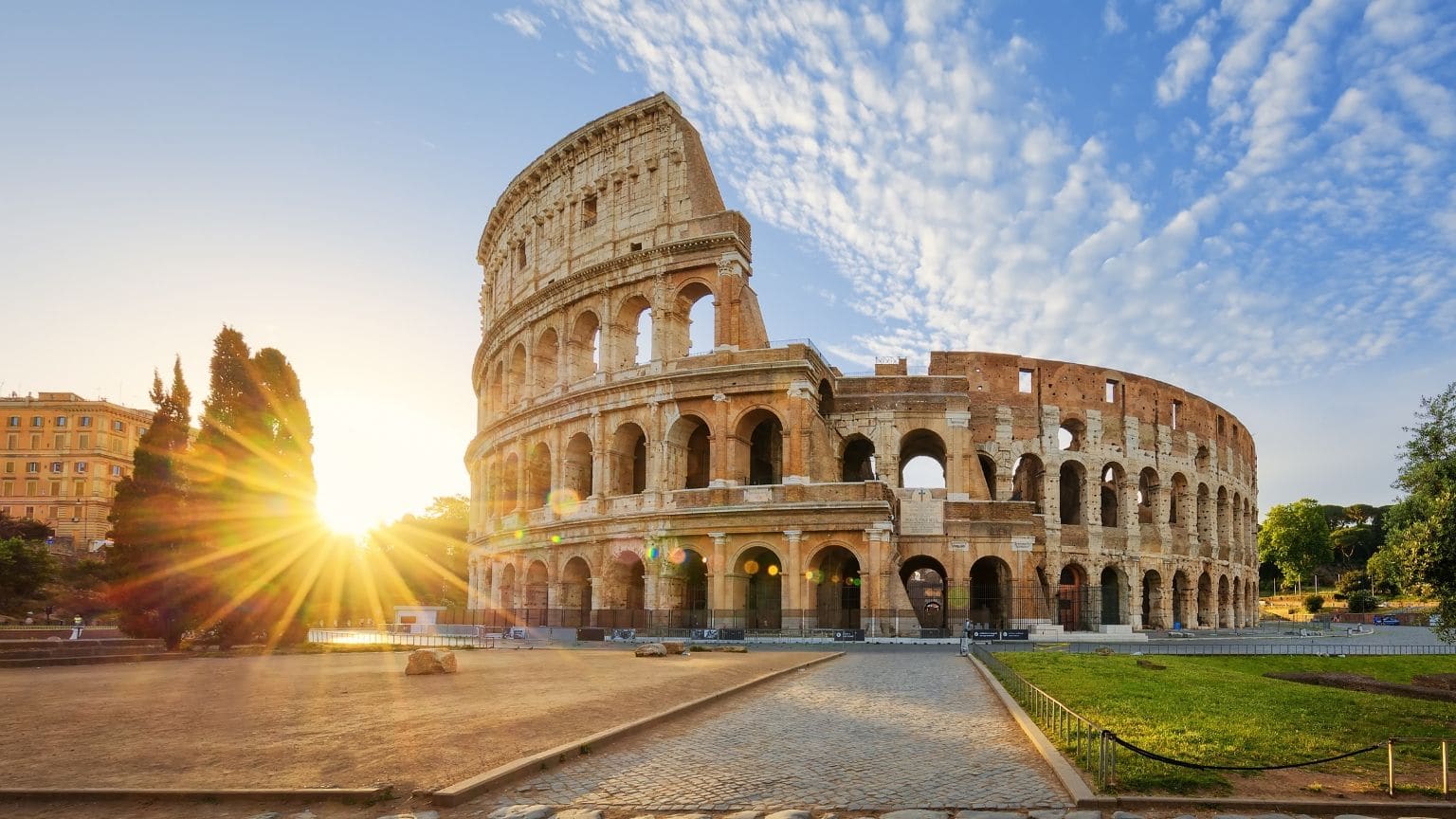 Italy has been the home of some great civilisations, the first being the Etruscans in about 800 BC. They built cities in central Italy that still exist like Arezzo, Chiusi, Cortona, Perugia and Cerveteri.

Influenced by the Greeks, the Etruscans drained marshes, built roads, loved painting especially frescoes, made terracotta sculptures, worked in bronze and made jewellery of gold and silver. They also built a powerful navy.

By 600 BC the Etruscans controlled central Italy including Rome. However in 510 BC the Romans rebelled and conquered Etruscan territory taking the last Etruscan city in 265 BC. 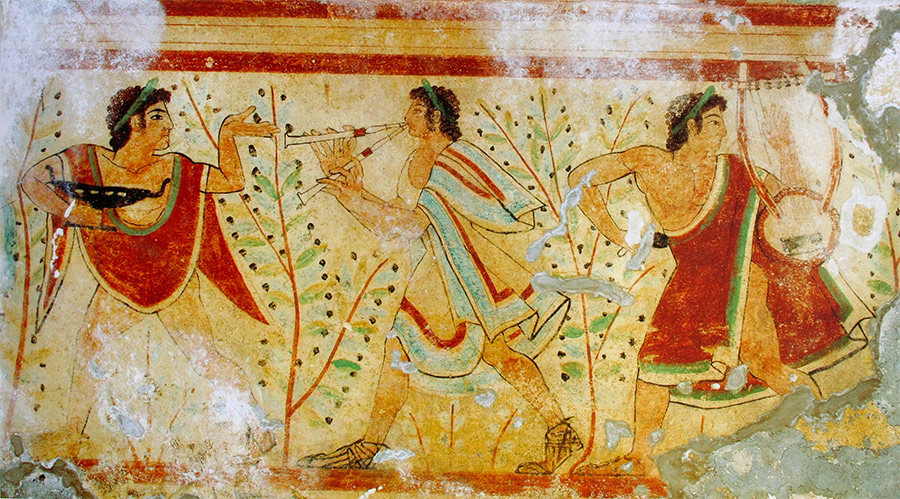 The Rise of Rome

In Rome, Etruscan kings had been advised by the senate, a body of Roman aristocrats (“patricians”). The Romans expelled the King and replaced him with two officials called consuls, elected from amongst Senators, who served for one year each.

The Romans were aggressive and expansionist but in 390 BC the Gauls captured and sacked Rome. Rome soon recovered and set about conquering southern Italy.

Next there was conflict with Carthage in North Africa, founded by The Phoenicians from Lebanon. They were very powerful and controlled much of North Africa, Sardinia, Corsica and even part of Spain.

The First Punic War between Rome and Carthage lasted from 264 to 241 BC and was mainly a naval war during which the Romans captured Sicily and occupied Sardinia and Corsica.

The Second Punic War (218 to 202 BC) started when Hannibal marched his army, including elephants, through Spain and southern France and over the Alps into Italy. He defeated the Romans in several battles but did not have the resources to destroy Rome. The Romans sent an army to North Africa led by Scipio who won the decisive battle at Zama in 202 BC.

Now the Romans expanded northwards conquering and colonising northern Italy and Macedonia by 90 BC. Rome grew increasingly prosperous with some Romans became very rich from these wars. Prisoners of war were enslaved and made to work on the large estates of wealthy Romans.

Rome had established a custom of appointing in times of emergency a temporary dictator, usually a successful General. None was more popular or more successful than Julius Caesar who became Dictator until his assassination in 44 BC. Soon afterwards Gaius Octavius (Caesars great-nephew) was granted the title Augustus and (effectively) became the first Roman Emperor. 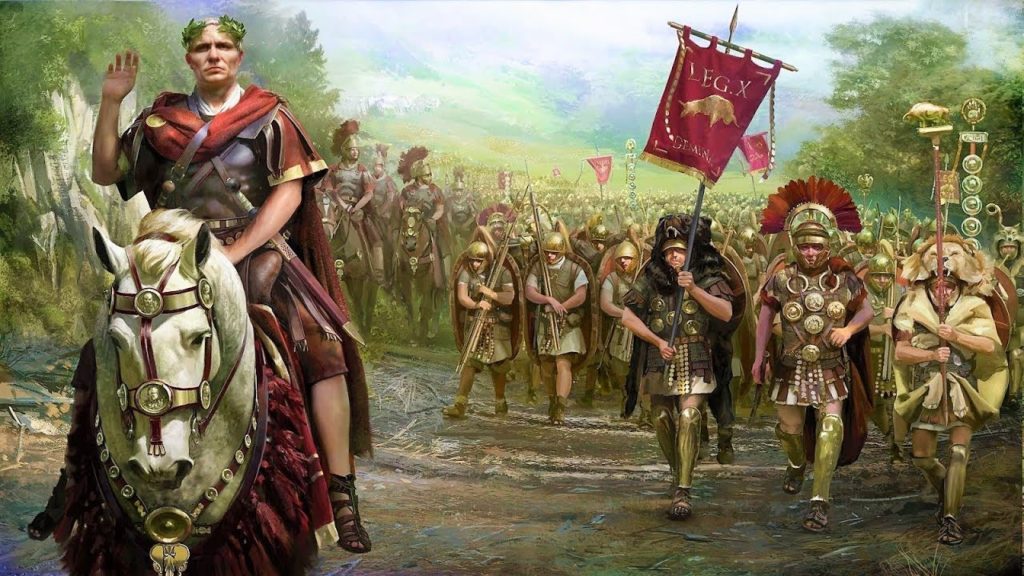 Roman Army on the March

Italy Under The Roman Empire

Augustus kept the senate but held the real power himself. Controlling the army and the civil service, he restored order to the Roman Empire after the turmoil that followed Caesar’s assassination. When he died in 14 AD it was peaceful & prosperous, and over the next 100 years the Roman Empire was at its peak.

When the empire started to decline, political instability set in. Order and prosperity was temporarily restored by Emperor Diocletian (284-305) who split the empire into two halves, western and eastern. Constantine briefly re-united them in 324 but they split again after his death.

The Western Roman Empire was in terminal decline with raging inflation and Germanic tribes on its borders growing stronger and stronger. Finally in 476 the last Roman emperor was deposed and a German called Odoacer made himself King of Italy. 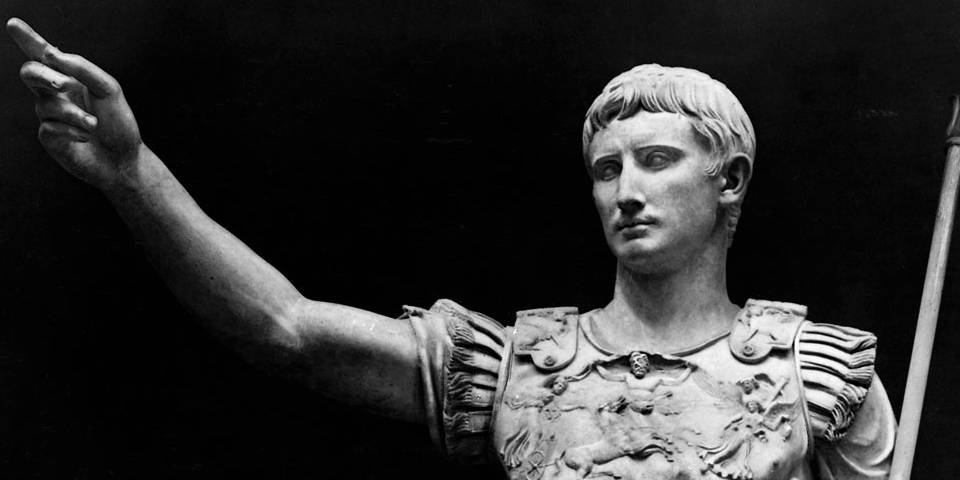 History of Italy in the Early Middle Ages

The eastern half of the Roman Empire was flourishing. Now called the Byzantine Empire, in 535 Emperor Justinian sent an army to Italy under his general Belisarius.

So began a long war between Italy under the Germanic Kings and the Byzantine Empire that devastated much of Italy as campaigns swung to and fro between the combatants.

Emenating from this is a history of Italy that contains centuries of strife and war.  In 568 the Lombards (Scandinavians from Hungary) conquered north Italy. Fighting their way south, they were halted by the Byzantines at a line from Ravenna to Rome. But 200 years later in 751 the Lombards took Ravenna and threatened Rome.

The Pope appealed for help from the Franks who invaded northern Italy defeating the Lombards and handing Ravenna and other territory in central Italy to the Pope to create a Papal State. 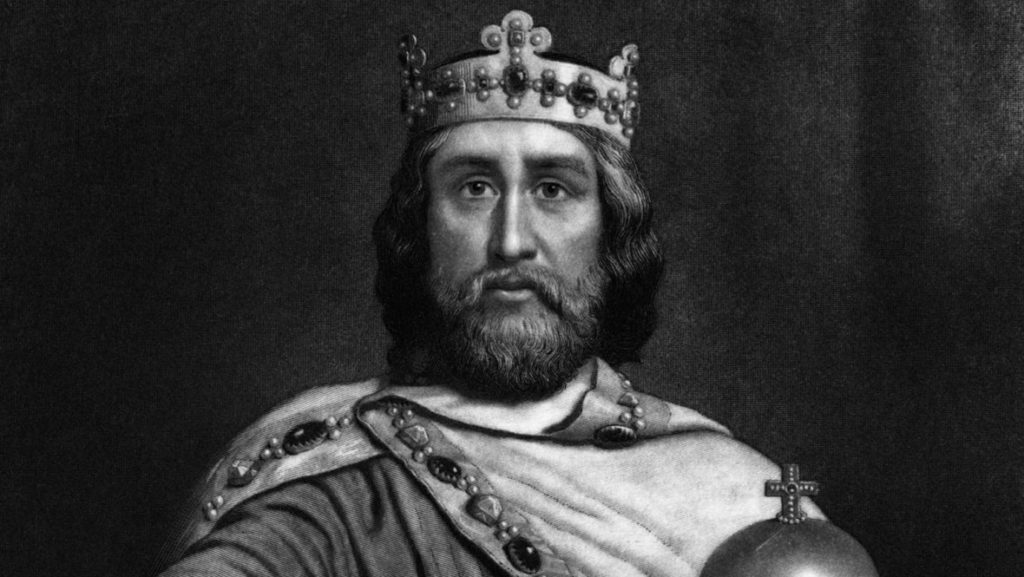 In 772, the Franks, this time under Charlemagne, again invaded Italy and defeated the Lombards for a second time. Charlemagne confirmed the Pope’s sovereignty over much of central Italy. He and his descendants, the German Emperors, were to rule the remainder of Italy as kings until the kingdom broke up in 1024 when the people of Pavia burned the royal palace.

The Normans now seized southern Italy and Sicily but in the north independent city-states emerged which, during the 11th and 12th centuries, grew rich on Mediterranean trade.

During the 12th century the German emperor Frederick Barbarossa tried to restore German authority over the cities of northern Italy. He destroyed Milan causing northern Italians to form the Lombard League. They defeated Barbarossa in 1174 forcing him to recognize the independence of the north Italian cities.

His son Henry VI captured Sicily from the Normans but failed to hold the island from a French invasion. Following a rebellion in Palermo, Peter of Aragon (from northern Spain) captured Sicily, which, for a time became separated from the mainland.

History of Italy in the Late Middle Ages

Art flourished in the 14th and 15th centuries producing great writers and artists. Rich Italians patronized the arts and the printing press was introduced into Venice by 1470.

The city-state of Florence especially flourished. Officially Florence was a republic ruled by an oligarchy but, effectively, it was controlled by the Medici family who were considered to be the richest bankers in Europe at that time.

Their patronage of the arts is believed to have created the Renaissance. 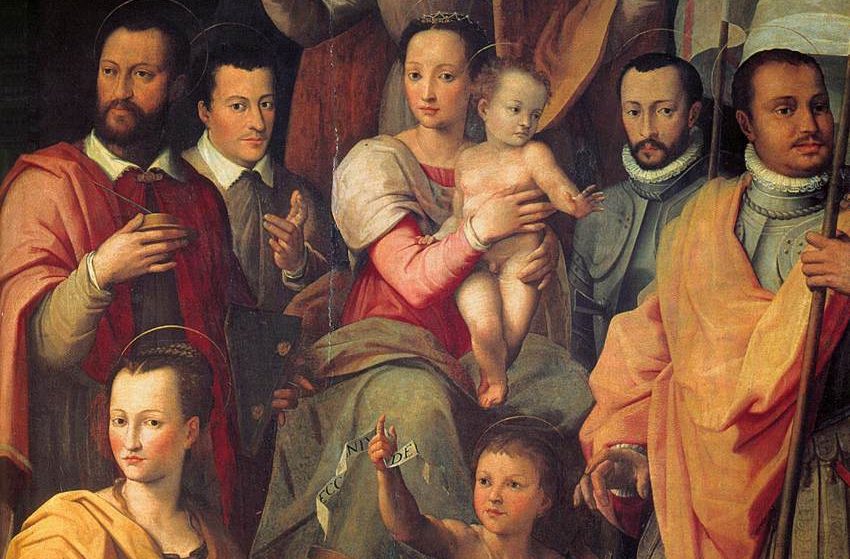 Members of the Medici Family

History of Italy in the 16th Century

France and Spain now fought over Italy. Instead of uniting against the invaders the Italian states split into two factions supporting one side or the other.

The French initially captured Milan but were effectively beaten by the Spanish and renounced their claims to Italy at the treaties of Cambrai and Cateau-Camresis.

With Italy dominated by the Spanish, cruel persecutions took place under the Inquisition.

History of Italy in the 17th Century

World trade became more global leading to a decline in Mediterranean trade. This sent the Italian economy into a long recession. Italian agriculture stagnated; poverty and banditry increased. Once the most advanced part of Europe, Italy became relatively backward.

Spain continued to rule southern Italy until 1647 when the people rose in rebellion. Although quickly crushed, Spain was a declining power and the War of the Spanish Succession (1700-1713) ended Spanish domination in Italy.

Spain was replaced by Austria who took Naples in 1707. They also gained Sardinia but in 1720 they swapped it for Sicily. In 1720 the Duchy of Savoy (in northwest Italy) became the kingdom of Piedmont-Sardinia. 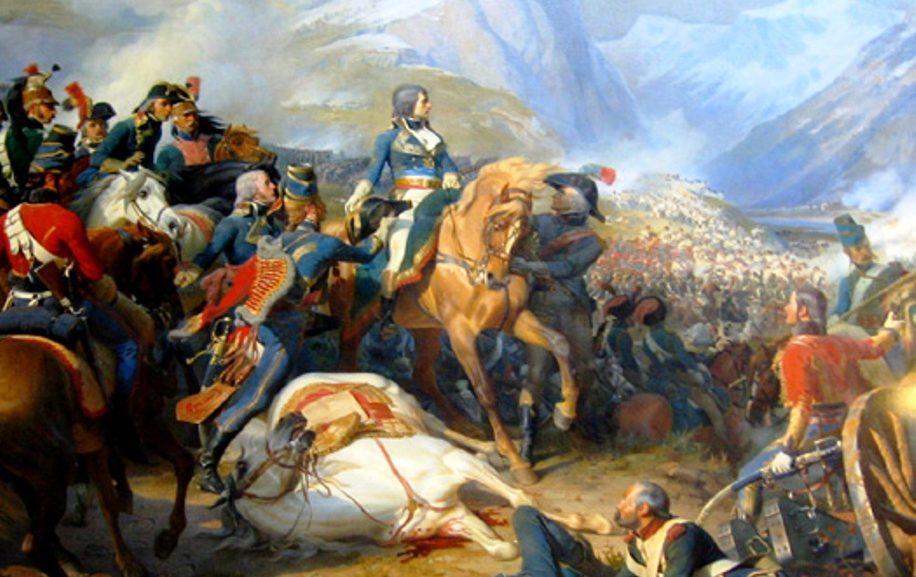 In 1796 Napoleon invaded Italy and created a new state out of Bologna, Ferrara and Milan called the Cisalpine Republic. He captured neutral Venice placing it under Austrian control, and then the mainland part of the Kingdom of Naples making his brother the king of that part of Italy while the actual King fled to Sicily which managed to stay outside French control.

In 1799 the Austrians and Russians drove the French out of Italy but the following year Napoleon won a great victory at Marengo. Napoleon restored the Cisalpine Republic renaming it the Italian Republic before turning it into a kingdom and making himself the king.

History of Italy in the 19th Century

After the fall of Napoleon, the old kingdoms were restored but not the republics of Venice and Genoa. Italy was full of discontent leading to secret societies being established like the Carbonari. They led a number of rebellions that were crushed by the Austrians.

Giuseppe Mazzini, who had been involved in the Carbonari rebellion in Piedmont in 1831, popularised the idea of a united Italy. Although forced to flee to France and later to Britain, he continued to stoke the fire of nationalism in Italy.

Then in 1848 war broke out all over Italy which involved numerous Italian States as well as the Papal State and the Austrians.

Eventually in 1861 most of the Italian peninsula was unified under the House of Savoy (Piedmont-Sardinia) as the Kingdom of Italy with Victor Emmanuel II becoming King. Venice and the former Papal States (including Rome) were added in 1871 followed by the islands of Sicily and Sardinia after Garibaldi was outmanoeuvred and agreed to Italian unification. 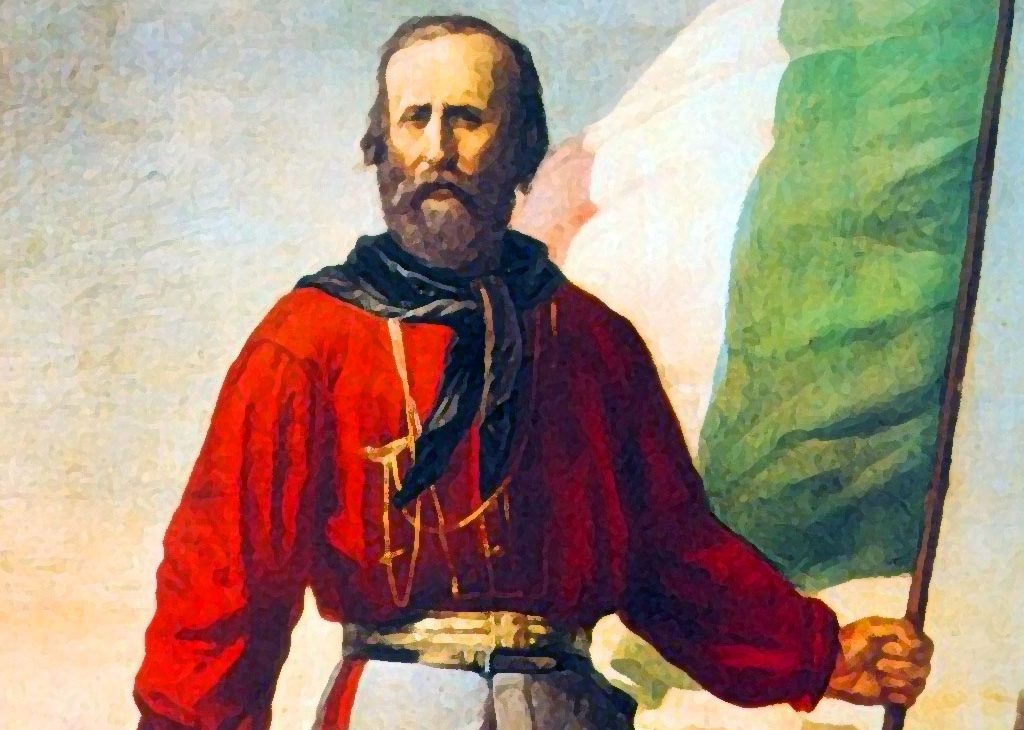 In 1908 Sicily suffered a terrible earthquake killing about 75,000 people in and around Messina.

In 1911-1912 the Italians conquered Libya and then, following the First World War, gained Trieste and the South Tyrol. They claimed that they were also promised part of the Dalmatian Coast and the Adriatic port of Fiume which they did not get.

Disappointed and angry at this, a poet named Gabriele d’Annunzio decided to take Fiume. He led 2,000 Italian nationalists to occupy the city for over a year. Finally the Italian Prime Minister, Giolitti, sent in the navy and they surrendered. However, Italy formally annexed Fiume within four years.

In 1919 Mussolini founded the Fascists, a movement that grew rapidly with 35 deputies elected in 1921. A year later the Fascists marched on Rome intent on taking power by force. Mussolini remained in Milan in case things went wrong because the king intended to use the army to resist the Fascists. He changed his mind and, instead, summoned Mussolini to be Prime Minister. 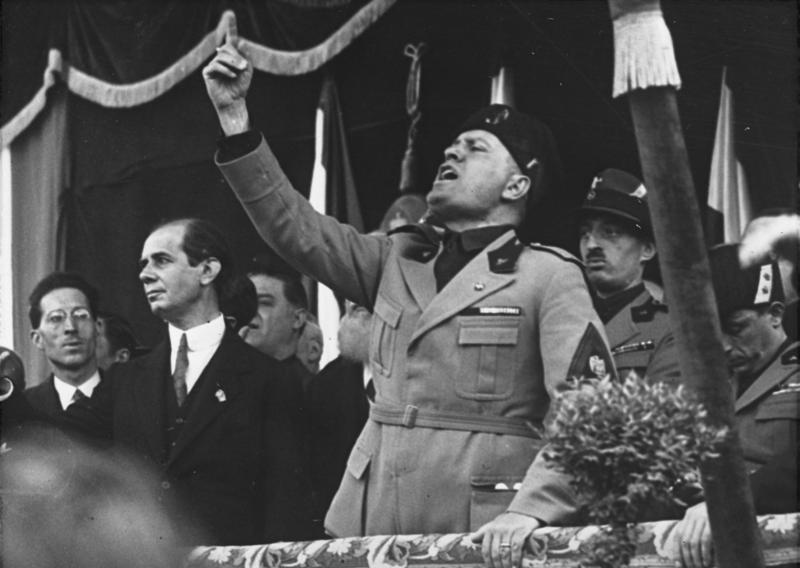 Mussolini making a speach in his normal manner

Even though his first cabinet contained members of other political parties, Mussolini strengthened his grip on power and, within a year, formed the Fascist Militia and gained support from the Roman Catholic Church by making religious education compulsory in primary school.

He then signed the Lateran Pact with the Roman Catholic Church which created the Vatican State. Religious education was extended to secondary schools and the Pope recognized the kingdom of Italy and accepted that Rome was now the capital of Italy.

The 1930s brought the great depression so the Fascists increased public spending on new public buildings, roads and other public works. Deprivation remained and crime was rife but much of this was covered up by the Fascist regime.

At the start of the Second World War Italy stayed neutral but with France capitulating and Britain facing invasion by Germany, Mussolini declared war on both countries hoping to gain overseas territories from them.

But by early 1941 the British had liberated Ethiopia from Italy and destroyed the Italian navy at Taranto. In North Africa the British army had decimated a much larger Italian army resulting in Hitler sending Rommel and the AfrikaKorps to rescue the situation.

On 8th September 1943, the allies landed at Salerno having already captured Sicily. The Italian Government immediately capitulated and joined the Allies.

Germany poured troops into Italy kidnapping Mussolini and making him the puppet ruler of northern and central Italy which they called the Salo Republic.

As the allied army advanced north, Italian partisans harried the Germans behind their lines. They liberated Milan, Turin and Genoa capturing Mussolini who they shot on 28 April 1945. Days later, the German army in Italy surrendered.

During the War, Italy suffered allied air raids that destroyed 60% of their industrial production. 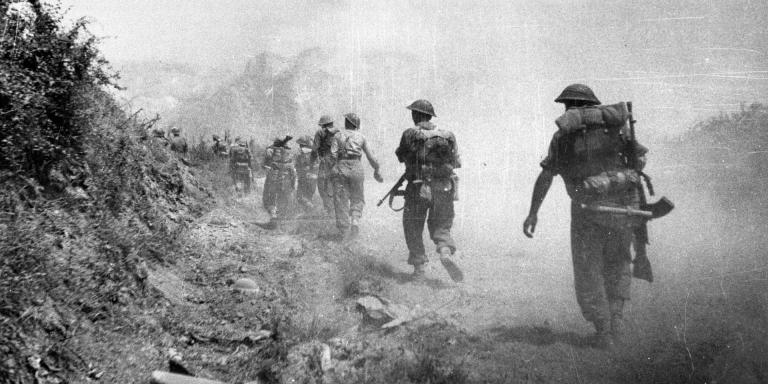 After the War, a referendum was held and the majority of Italians voted for a republic, the first president being Luigi Einaudi.

With help from USA Marshall Aid, Italy experienced an economic miracle with booming industry and rising living standards during by the 1950’s and early 1960’s. But Italy remained politically weak and became a founding member of the European Community (now European Union) as it perceived European integration was a means of providing the country with stability and ensuring that it remained within the ‘western’ (ie: ‘non-communist’) sphere.

But acute poverty remained in the south of Italy and many southern Italians migrated to the north in search of jobs or emigrated to countries like American, Britain and Australia.