The Declaration of Independence: the Committee of Five presenting their draft to the Second Continental Congress in 1776

The area which is now the United States has been inhabited since prehistoric times by Native American tribes often referred to as Indians or Plains Indians. The first attempts to found a colony in North America were made by European gentlemen adventurers. Native Americans suffered greatly from the influx of Europeans. The transfer of land from Indian to European — and later American — hands was accomplished through treaties, wars, and coercion, with Indians constantly giving way as the newcomers moved west.

The first successful English colony was founded at Jamestown, Virginia, in 1607. In 1620, English Puritans (Pilgrims), who were non-conformists or dissenters from the Church of England, founded Plymouth Colony in what later became Massachusetts. By 1733, English settlers had founded 13 colonies along the Atlantic Coast, from New Hampshire to Georgia. Colonists arrived from other European countries, but the English were better established.

On July 4, 1776 thirteen colonies of Great Britain declared the independence of a nation called “the United States of America” in the Declaration of Independence, primarily authored by Thomas Jefferson. George Washington – a renowned hero of the American Revolutionary War – became the first President of the United States under the new U.S. Constitution. The nation’s birthday is celebrated on the 4th July.

During the 19th and 20th centuries, 37 new states were added to the original 13 as the nation expanded across the North American continent and acquired a number of overseas possessions. 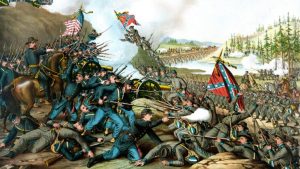 The two most traumatic experiences in the nation’s history were the Civil War (1861-65) and the Great Depression of the 1930s. The Civil War, also known as “The War Between the States,” was fought between the United States of America and the Confederate States of America, a collection of eleven southern states that left the Union in 1860 and 1861, forming their own country and carrying on all the affairs of a separate government.

There were many causes of the civil war, including differences between northern and southern states on the idea of slavery, as well as trade, tariffs, and states rights. The Confederate States were eventually defeated in the spring of 1865.

The Great Depression (1929-39) was the deepest and longest-lasting economic downturn in the history of the Western industrialized world. In the United States, the Great Depression began soon after the stock market crash of October 1929, which sent Wall Street into a panic and wiped out millions of investors.

However, the Second World War would change everything. America declared War on Japan and Germany following the attack on Pearl Harbour by the Japanese and went on to have a pivotal role in the eventual outcome of the war.

Economically this was a game-changer for the country and as the Cold War unfolded in the decade and a half after World War II, the United States experienced phenomenal economic growth. The Second World War had brought the return of prosperity, and in the postwar period the United States consolidated its position as the world’s richest country.

Further Information About the United States of America: