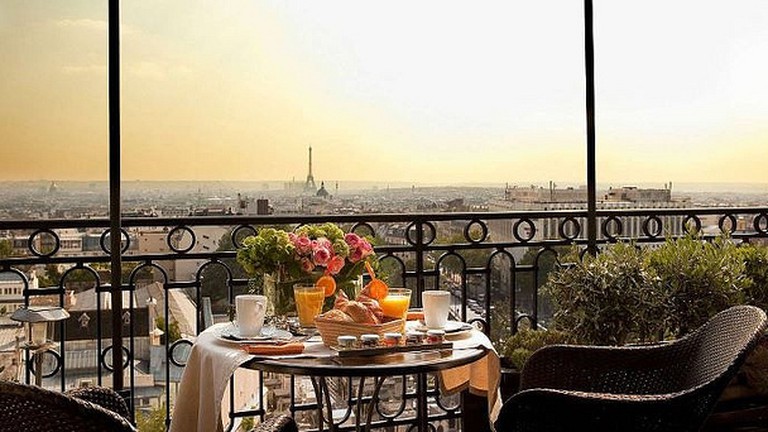 I hesitate to tell you this but a few years ago I had a boyfriend who was a banker. I know, before you say anything, I should have known better! Anyway, he loved to treat me and he would take me to Paris because, if the truth be known, he was rather keen on the city himself.

So, I got to know Paris quite well from our frequent visits when we used to stay in some posh hotels like La Villa Haussmann, Hotel Parister, Hotel San Regis and even, once for my birthday, at the top-rated Le Bristol Paris. Well why not, he could afford it!

But gone are my days soaking up all the luxury that this romantic city can offer. On my latest assignment to Paris – this time on my own! – I didn’t have the financial resources to sample the delights of the city’s finest dining institutions run by some of the world’s greatest Michelin-starred chefs.

Instead it was eating on a budget. But, I can report, I was still able to enjoy some of the tastiest cheapest eats that this wonderful city can provide.

OK, so you’re in France and you actually want to eat French food, but on a budget?

No Problem! Paris is full of small Bistros that serve extremely good French food at very inexpensive prices. However, there are lots of other alternatives:

In France wherever you go there is always the Boulangerie. It’s the cheapest way to snack in France; just pop into one of Paris’ best bakeries and buy a tasty flaky croissant, pain au chocolat or baguette for just €1.

Alternatively get a sandwich for around €5. There is nearly always an impressive display of beautiful cakes and pastries on display; just pick the one that catches your eye.

French crêpes are one of the cheapest meals in Paris; they are perfect for vegetarians and I love them.

For less than €10 you can sit down in a lovely crepêrie to eat some of the most mouth-watering meals in the country. I have tried everything from sweet vanilla butter crepes to the classic cheese and onion confit crêpes. But my favourite is the authentic Breton crêpes.

My favourite crepêrie is Breizh Café

Falafels are very popular in Paris. Originating in the Middle East (most likely Egypt) they are a deep-fried ball, or a flat or doughnut-shaped patty made from ground chickpeas, fava beans, herbs, spices, and onion.

Go to the Rue des Rosiers in the fashionable Marais district of Paris and you have a choice of at least four restaurants serving incredible Falafels.

It’s incredible and it’s cheap. A boiling pot of melted cheese mixed with white wine, cooking continuously over a little burner on your table, waiting for you to dip your French baguette in and eat.

Just the right place for this is Le Chalet Savoyard.   But also, try fondue’s equally delicious close cousin, raclette at one of three Les Fondus de la Raclette restaurants in the centre of Paris.

Paris likes to claim to be the food capital of the world so you would not expect Parisians to have a burger addiction.

But, of course this being Paris, this is a city filled with really great burgers. Classic burgers can be found on the menus of pretty much every French bistro while the hipster food restaurants are serving them with a modern twist.

In Paris you will find the burger of your dreams at usually for around €10.

I watched vegetarians drooling over their veggie burgers; other Parisians were enjoying burgers filled with regional French specialities; there is even a very French version of the classic American burger. If you’re looking for cheap meal in Paris, look no further than the nearest bistro for a quick burger fix.

If you want a break from all the French food or if you’re a vegetarian or vegan needing an easy and cheap meal, Paris has its own piece of Indian culture with authentic, in-expensive Indian restaurants. Differing from the UK, Indian food in France is more based upon southern Indian recipes which are inclined to be more spicy that in the UK.

The area around the Gard du Nord Station has numerous good Indian Restaurants.

Asian, Moroccan, Cambodian, Healthy American, even African with Cocktails – there is an enormous variety of foods to try and sample in Paris at really affordable prices.

As Paris is also a student city, there are some great street food markets with very cheap food of all types and varieties.

So after a weekend sampling really great food in Paris – you can tell I’m a slave to my job! – it’s back home and back on the diet. See you next time after I have been on my travels again.

I Want More Time in Provence